Making the Switch to ARCHICAD

More than a year ago here on the blog, we profiled Cheikh Sylla of Tampa, FL-based Sylla International and his decision to adopt ARCHICAD over another BIM software he had been using for quite some time. Since then he has been busy, putting his skills and ARCHICAD to the test. At the start of 2015 Sylla evaluated his decision candidly, honestly sharing his experience for his readers and other architects considering a similar change.

Was it Worth it?

Rather than rehash his thorough overview of what the impact of the change has been, I thought it wise to discuss how he’s using the software on an actual project. Sylla is in the design phase of creating a nearly six thousand square foot home that features a pool in a flood zone of Miami, Florida. Sylla is using ARCHICAD 18 to create the design through to construction documents that and at press time was nearing the point of submitting the plans to the city for review. 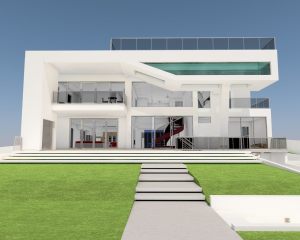 The location of the 3-story home provided some restraint on the design of the home and demanded some creativity and flexibility with the general layout. Given that the area has been prone to flooding, the city requires that no living areas be situated on the ground floor. The owner wanted a pool on the property as well as a front porch. These aspects of the home presented a challenge since the neighborhood also requires a front setback of 80 feet in addition to a rear setback – forcing those two elements to compete with each other for space.

The current design almost didn’t happen, or wouldn’t have if the home owner had not met with Sylla by chance at an event. He had previously engaged with a different firm to prepare plans following these restrictions for his home, secure a building permit and was close to moving forward. However, the husband never truly felt happy with the design. After discussing the project with Sylla – he agreed to allow for the creation of a new design concept – but it had to be ready quickly.

The Power of ARCHICAD Shines Through

Sylla says it was a challenge he welcomed, happy to have ARCHICAD and the powerful CineRender engine in ARCHICAD 18 to come up with a new design quickly and expertly. 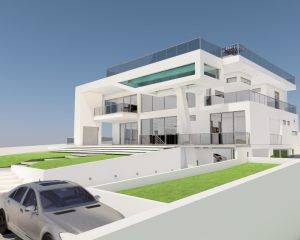 “ARCHICAD shined here. We managed to design the house from scratch and generate several photorealistic renderings of the house. When they saw the renderings, they were floored. I remember hearing the owner tell me it was exactly what he wanted. I know for a fact that creating this design, this quickly, with this level of photo realism in the renderings was not possible before I switched to ARCHICAD.”

Sylla adds that being able to efficiently design in a realistic way and then be able to use that model for the actual plans, a real bonus.

“ARCHICAD 18 makes beautiful renderings, which helps for presentation purposes, of course. But remember, I was designing the actual building – which meant that there was a continuum from the design – it becomes the model and the model becomes the construction documents. There is a project continuity that didn’t exist before with other programs – you don’t have do design, then start the project over.”

Sylla also needed to determine a way to provide privacy for the residents while enjoying their pool – in spite of a perimeter wall limitation of four feet. He first chose to make that the ground level of the home a garage area and move the living area to the second floor.

The roof deck allows for privacy and includes a unique feature of a pool. The result created a generous front porch and an extremely unique design feature of the house. An added bonus, the elevated pool area automatically has privacy as well as an enhanced view of the surrounding area. 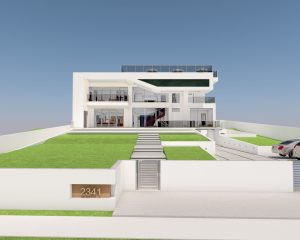 “Building a pool on the roof is not commonly done, even in a flood zone. We knew that the only way to go was up, so we elevated it and placed the pool above the front porch so they occupy the same space vertically.”

Structurally speaking – positioning the pool there added challenges. The home owner wanted a fairly open design with lots of windows, making supporting the pool on the roof a design priority. Sylla went with strong building materials of masonry and concrete, supporting the pool on one end with a single column of 2’-6”X2’-6”. The column leans forward to support one end of the pool, since a straight column would have landed on the front porch steps.

“The leaning column is super strong. When you see the views of the nearby park and Key Biscayne, it is worth all the while we spent. Not only is it a nice amenity for the home, the residents get this fabulous view of Coconut Grove.”

Sylla has committed so fully to ARCHICAD that he realized its value goes beyond architecture. Especially on a structurally challenging design as on this home, he sees the importance of using BIM among all consultants.

“I’m using BIM with ARCHICAD, but my consultants were not using any BIM. I ended up giving my consultants sections that he used to develop most of his details. It did help with coordination, but I have realized that it is not worth it to work with a consultant who is not using BIM. It defeats the purpose of my using BIM in the first place. The benefits are so great that I cannot even imagine taking on the smallest project without ARCHICAD – it makes no sense to work without it or in 2D anymore.”